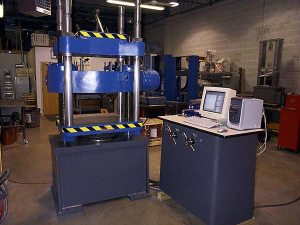 A variety of choices

There are three types of upgrades that ADMET offers on hydraulic testing machines:

Basic Upgrade – The simplest upgrade keeps the existing manual control valves and replaces the dial gage or existing digital indicator with a new single channel digital indicator to display load and report ultimate tensile strength. Some of the more sophisticated single channel indicators are also capable of calculating yield by the halt of the pointer method and downloading results and load vs time data to a computer for reporting and plotting.

Three Channel Upgrade – The next step up when keeping the existing manual control valves is to incorporate a two- or three-channel digital indicator that is capable of measuring force, displacement, and strain. A testing machine equipped with a two or three channel indicator is capable of generating a stress-strain curve and calculating offset yield, Young’s modulus, ultimate tensile strength, and percent elongation according to ASTM E8 Standard Test Method for Tension Testing of Metallic Materials. Results and stress-strain curves can be uploaded to a computer for further review and analysis.  New or existing extensometers can be connected to the indicator for measuring strain.

PC/Windows Based Upgrade – Installing a PC/Windows based materials testing system is the most sophisticated upgrade package for a manually controlled hydraulic testing machine. It provides all of the capability of the three channel digital indicator but adds calculations for plastic strain ratio (ASTM E517), K and n values (ASTM E646), plus many more. PC based materials testing systems also provide more data handling and reporting capabilities than a standalone digital indicator. 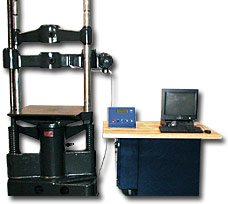 ADMET also performs retrofits on hydraulic testing machines in a couple of ways:

Basic Servo Retrofit – The most affordable servo retrofit option is to keep the existing hydraulic power unit, bypass the existing manual control valves and install a new servo valve manifold. Either a multi-channel digital indicator or a PC/Windows based materials testing system can be used to control the machine. The standalone digital indicator is more suitable for running similar tests repeatedly, whereas the Windows based system provides more control capability for performing a variety of tests.

Full Servo Retrofit – The more expensive servo retrofit is to replace the existing hydraulic console with a new servo hydraulic power unit. Again, either the multi-channel digital indicator or Windows PC-based system can be used to perform the tests.

In addition to upgrading existing manually operated testing machines to servo control, it is also possible and quite common to upgrade the controller and software on an existing servo equipped static and fatigue rated hydraulic testing machine. This is an economical solution because the new controller and software only has to be attached to the existing load frame and hydraulic power unit.

In this video, ADMET founder and CEO Richard Gedney explains the benefits of retrofitting your existing hydraulic testing machine:

ADMET has helped many companies realize improved material testing performance and accuracy through testing machine retrofits. Click to learn more about how ADMET helped each company below:

We’re Standing By to Help You!

If you think your company would benefit from a hydraulic testing machine retrofit or upgrade, give us a call or contact us online! Our sales engineers are standing by to discuss your needs and how we can help you meet your goals.  Call us toll free at (800) 667-3220 or fill out an online Sales Inquiry.

Have a question about testing machine retrofits?