Some metals, particularly annealed low-carbon steel, or mild steel, show a discontinuity when transitioning from elastic to plastic deformation that produces the yield point phenomenon in the stress strain curve. An example of the discontinuity as the material enters the plastic region is shown in Figure 1. Here the yield point is located just beyond the point where the offset yield line intersects the stress strain curve. 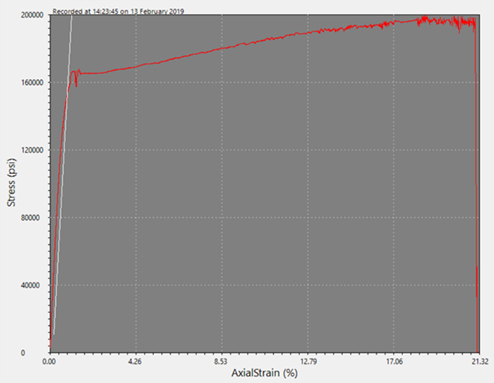 Figure 1 – Stress Strain curve in which Lüders bands occur during ASTM E8 tensile pull where the test in controlled by strain rate until yield in which it switches to position control.

At the yield point, a band of deformed meta, sometimes visible appears at a point of stress concentration. Coincident with the formation of Lüders bands, the load drops and the band begins to propagate along the length of the specimen. In certain industries these can be referred to as stretcher stain marks or slip bands. Oftentimes, multiple bands form at points of stress concentration. The bands are generally at 45 degrees to the direction of loading because local plastic deformation occurs when the shear stress exceeds the stress needed for moving dislocations along planes; and the highest shear stress in a tensile tested specimen always occurs at an angle of 45 degrees to the direction of pull. These bands are called Lüders bands

(Figure 2) and this type of inhomogeneous deformation is sometimes referred to as the Piobert effect, Luders deformation and/or local plastic deformation.

Figure 2 – ASTM E8 fractured dogbone test specimen exhibiting Lüders lines on steel specimen.
As multiple Lüders bands propagate across the specimen, the stress-strain curve exhibits a serrated or noisy pattern (See Figure 1 – the stress strain curve between yield point and ultimate). This jagged pattern will continue until the Lüders bands propagate through the entire length of the specimen.
Lüders bands typically occur in low carbon steel but not in other alloys such as aluminum and titanium. This is because work hardening suppresses localized straining, or strain aging, resulting in uniform plastic flow after yield. Lüders band formation can pose problems in metal forming. For example, when you plastically deform sheet steel to make a car fender, the formation of Lüders bands will cause ripples on the surface rendering the part as scrap.

Our engineers are ready to help you!
Contact us today!
By John Gikas|June 6th, 2019|Testing Issues|