The “Squirmin’ Herman” test system was designed based on Boeing standard BSS-7302 and is used to investigate the effect of aircraft passenger wear on seat upholstery fabrics and fire blocking layers.

ADMET wear testing machines come with a dynamic actuator and the fixturing required to run the test of your choice. This featured configuration shows the dynamic foam testing system with the Squirmin’ Herman fixture, designed per the description in the standard. The dynamic movement can be controlled by both position and load. 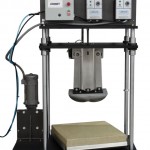 Have a quick question about foam testing?