A custom axial-torsion ADMET eXpert 8600 series testing machine was designed in collaboration with the Rock and Ice Deformation Laboratory (RIDL) at Woods Hole Oceanographic Institution (WHOI). Among many other topics related to the ocean and its impact, WHOI scientists study the mechanical behavior of Earth and planetary materials and examine the microscopic features of rock and ice to reveal how they deform. Current research topics include tectonic plate boundary formation, glacial flow on Earth and Mars, and mantle transition zone dynamics. To read more about WHOI Rock and Ice Deformation Laboratory projects and research, follow the link below.

Scientists at Woods Hole Oceanographic Institution were looking for a testing system to simulate forces exerted on ice in the arctic. The data obtained would provide information on the mechanical properties of solid ice and be used in Rock and Ice Deformation Laboratory research and publications. 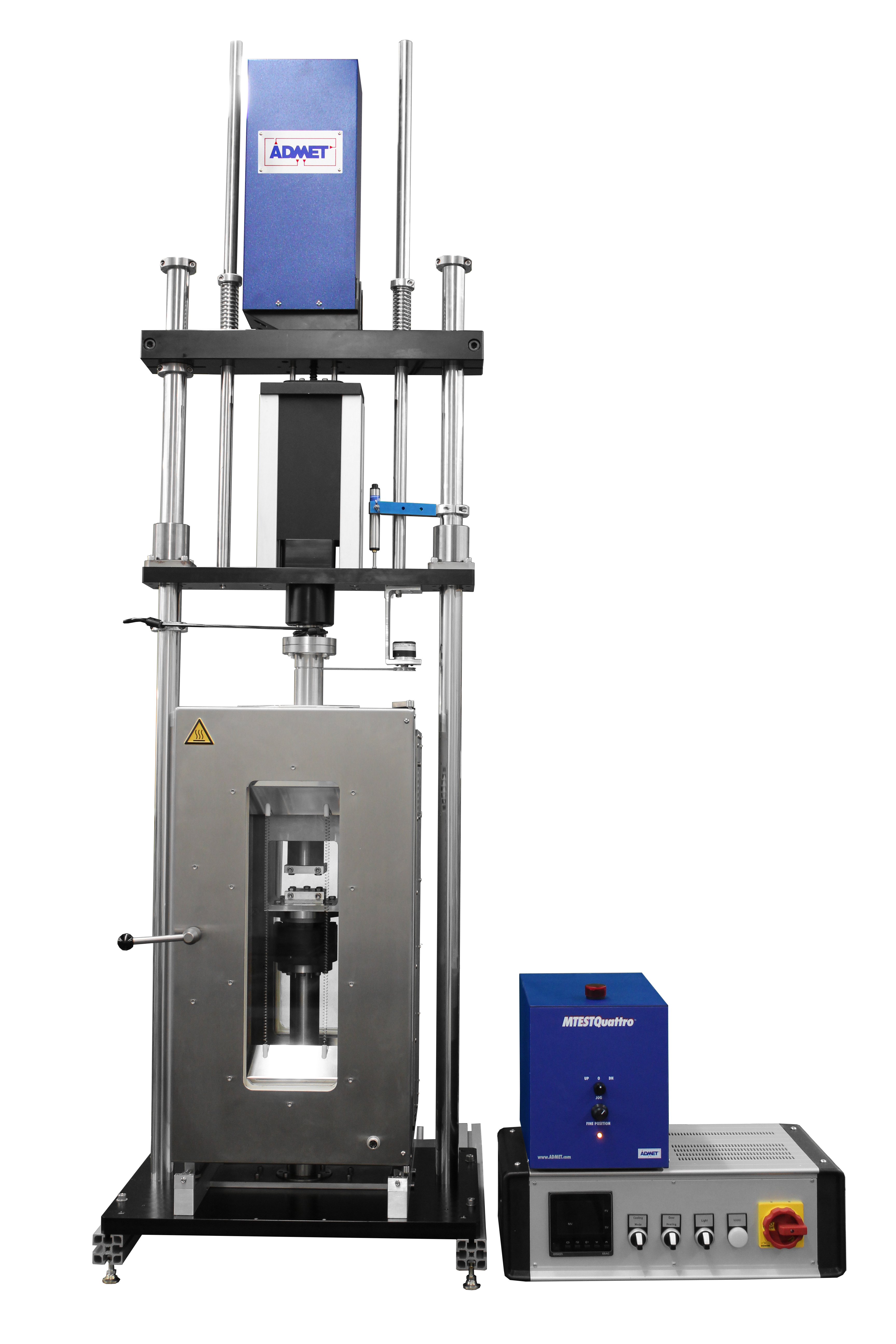 Components of the system include:

Features of the system include:

ADMET eXpert 8603 built for WHOI was carefully designed to meet the customer’s requirements. The testing system was amongst the slowest moving machines built with speeds down to 0.8 degrees per minute in torsion.

A custom-designed fixture was built with hexagonal housing for ice specimens to allow very precise angular movements. The specimens would be placed in the fixture pocket and secured in place by sliding the grip locking door into the housing.

To provide further accuracy in compressive strain and torsional strain measurements, an auxiliary transducer package with two transducers and their necessary mounting hardware was developed. A linear displacement transducer with position resolution down to 0.00000004 in was incorporated in the machine design and an angle transducer with unlimited clockwise and counterclockwise range and 0.000009 degree resolution was added to the back end of the motor. If, in the future, further uniaxial or angle displacement measurements on different points of the specimen are needed, additional transducers can also be added to the system.

The testing system was equipped with ADMET’s MTESTQuattro PC-based controller and software for servo-control, data acquisition, reporting, and more. All readings, including input from the environmental chamber, would be recorded and accessed through the MTESTQuattro software. 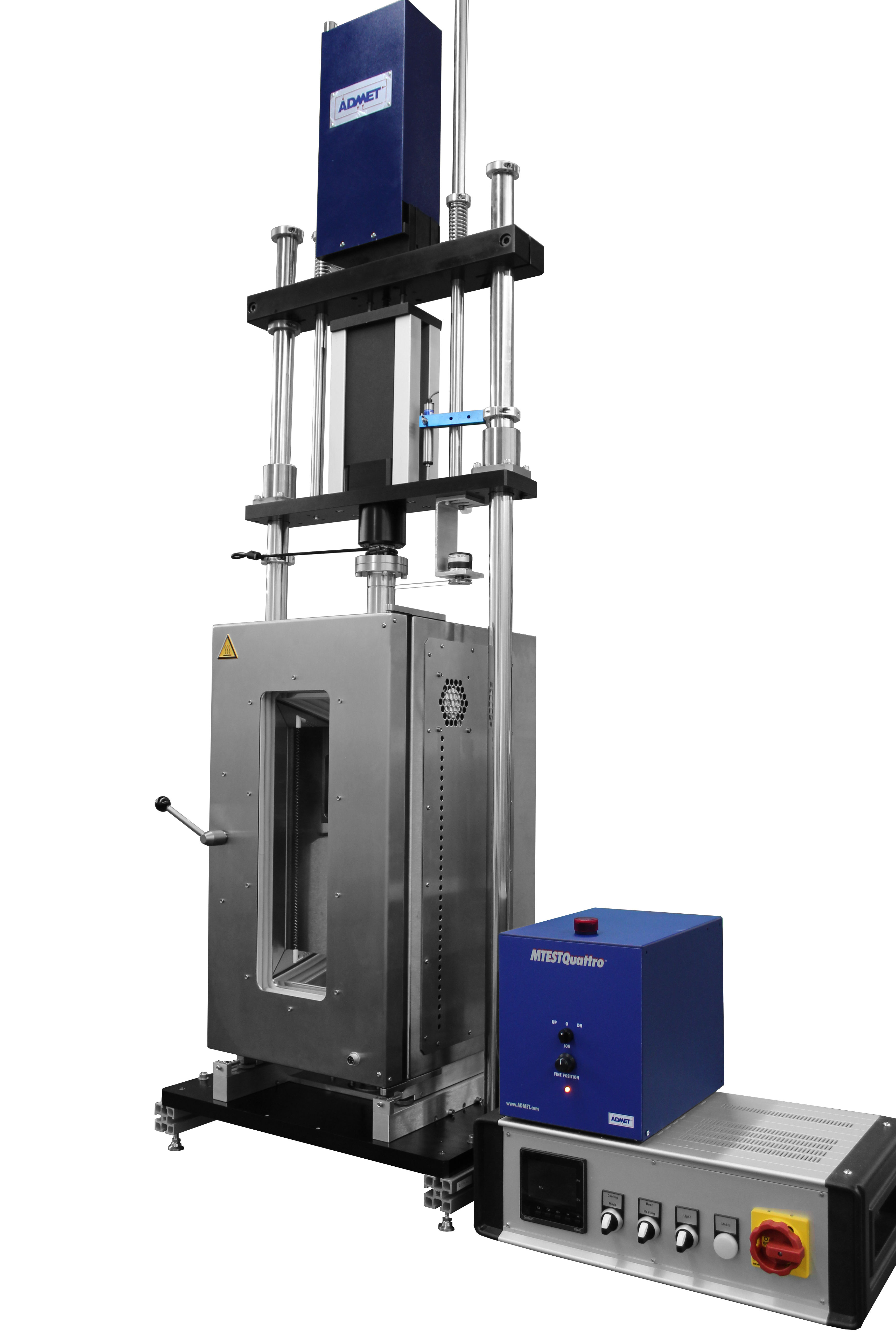 MTESTQuattro channels were configured as below:

MTESTQuattro axial-torsion controller standard capabilities include monotonic, cyclic, and segmented control profiles with software selectable control channels. The end-user informed ADMET that the laboratory would be using complex test profiles such as (1) hold in compression, (2) rotate back and forth or (2) load in torsion for several days at 5 in-lbf increments and (1) hold in torsion, (2) oscillate up and down at slow speeds.

For WHOI testing application and custom speed requirements, the controller was validated with its fine jog feature to maintain low speeds at high and low gear and in uniaxial and torsion directions.

In addition, MTESTQuattro features an autotuning feature for other readings such as temperature from the environmental chamber. This feature enabled accurate temperature control with tolerance +/- 0.1C.

More on WHOI and Rock and Ice Deformation Laboratory

The Woods Hole Oceanographic Institution is dedicated to advancing knowledge of the ocean and its connection with the Earth system through a sustained commitment to excellence in science, engineering, and education, and to the application of this knowledge to problems facing society.

Research topics at WHOI Rock and Ice Deformation Laboratory include the rheological behavior of rock and ince, plate boundary deformation and strain localization, glacier dynamics on Earth and Mars.

Contact ADMET to discuss how we can help achieve the results you’re looking for.