Increase your testing efficiency with a custom fixture

One of the largest pressure sensitive adhesive (PSA) tape manufacturers was in search of a new peel force testing system to obtain more accurate test results and increase test lab efficiency. The system had to perform both 90 and 180 degree peel tests with minimal changeover time between them.

PSA tape is made in wide rolls 4′-10′ feet across and then split into 1-2” widths to create rolls of tape. During production, technicians test samples across the wide roll of tape: left side, middle, and right side. The test begins by applying the tape to a standard metal panel and testing it after waiting a defined amount of time.

Once the tape is applied, the adhesive bond gets stronger with time. However, testing one sample at a time made the dwell time different for each sample, so the peel forces across the web did not correlate. Clearly, the manufacturer needed to test all three at the same time. Correlation between the three samples was the primary driver for a new system but the testing time had to be reduced, as this is a high-throughput manufacturing operation.

Normal universal testing machines (UTM) have one load cell. This system needed three; one for each sample. ADMET’s MTESTQuattro software and electronics were used because it has 8 channels of input thus accommodating the three load cell inputs. The next consideration was the load frame. A dual column UTM has a large enough crosshead (16”) to hold three load cells but the peel forces were all under 10 lbf. It would have been cost inefficient to use such a high capacity system only for the physical space.

A dual column eXpert 5000 series modular system was selected since it has the amount of space needed and an available low force actuator, which is more suitable for the forces required. A 90 degree bed wide enough for three test panels was installed on the base of the system. A set of pneumatic vise grips was installed on a plate mounted to the 90 degree peel bed and could slide into position under the upper grips to quickly changeover to 180 degree peel tests. The test reports shows the average peel force of each sample. Now that all tests are done on the same machine at the exact same time, different peel force values can be attributed to the manufacturing process and not from the test itself. 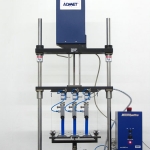 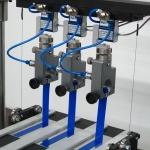 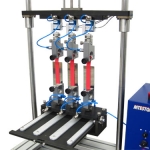 Have a quick question about adhesives testing?