In each case the surface adherend is relatively flexible and the backing material is very rigid. In order to peel the flexible material from the rigid backing material and accurately measure the peel strength, a special device called a climbing drum peel fixture (shown) is used. The peel fixture ensures that only “peeling” forces are applied to the flexible adherend/rigid adherend interface thus ensuring accurate measurement of peel resistance.

Honeycomb structural panels are a common adhesive assembly that requires ASTM D1781 testing. These panels provide high stiffness and strength with low weight for aerospace and industrial applications. The adhesive used for the sandwich panel construction is critical to ensure structural integrity. Testing can be complicated due to high adhesion strength and the dimensional rigidity of the core section, and the fact that the facing panels are not completely flexible.

Prior to conducting ASTM D1781, it is important to read the entire specification in the relevant ASTM publication. 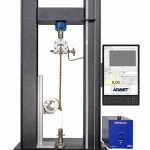 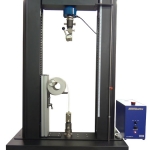 Just have a quick question about running ASTM D1781 on your system?