ASTM D1894 is a testing standard designed to measure the friction of plastic film and sheeting.  This test method measures the initial and moving friction of one material being dragged across another, otherwise known as the static (initial) and kinetic (moving) coefficients of friction (COF).  ASTM D1894 is commonly used for plastic sheeting but you can adapt it for nearly any product or material (example: Friction of sneakers on anti-slip paint).  The test utilizes a standard universal testing machine, low force load cell, and a COF apparatus described in the specification (ADMET part number FS-CFT).  The initial force to move the sled is used to calculate the static COF, and the average force once the sled is moving is used to calculate the kinetic COF.

Prior to conducting ASTM D1894, it is important to read the entire specification in the relevant ASTM publication.

To perform ASTM D1894, you will need a special fixture specifically designed to perform Coefficient of Friction tests. It consists of two main parts, a sliding plane or plate and a sled. The test can be performed sliding material over itself or over a different material. 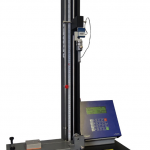 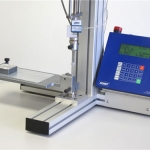 Coefficient of Friction sled for ASTM D1894 on an eXpert 5600 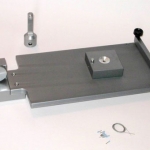 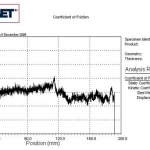 Just have a quick question about running ASTM D1894 on your system?