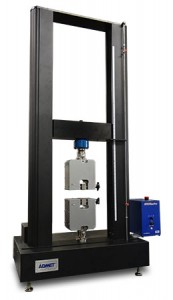 The ASTM D4884 test method determines the seam strength of geotextiles using wide-width samples. Narrow geotextile specimens tend to neck down in gauge area when under stress. The wider width specimen will minimize this phenomenon, leading to more accurate test results. This test method can be used to help with seam design engineering for the geotextiles being evaluated.

A constant-rate-of-extension type universal testing machine must be utilized to meet the requirements of this specification. The specified test specimen width is 200mm (8 inches) wide. The grips should also be wide enough to grip the entire width of the specimen. The minimum width of jaw faces should be 200mm (8 inches) and the minimum length should be 50mm (2 inches).

Before conducting ASTM D4884, it is important to read the entire specification in the relevant ASTM publication.

Just have a quick question about running ASTM D4884 on your system?