Sheet metal forming operations consist of simple bending, to stretching to deep drawing of complex parts. The mechanical properties of the sheet material greatly influences its formability. Formability is a measure of the amount of deformation a material can withstand prior to fracture or excessive thinning. Determining the extent to which a material can deform is necessary for designing a reproducible forming operation. Testing the incoming sheet material is also essential because material properties may vary from coil to coil and effect part quality and scrap rate.

Prior to conducting ASTM E517, it is important to read the entire specification in the relevant ASTM publication.

Equation 1 tells us that the r value is dependent on the ratio of width and thickness changes as the sample is pulled in tension. The word “plastic” in the Plastic Strain Ratio name implies that the specimen is pulled beyond its elastic limit and that only the strain that induces plastic flow is considered in the calculation. Because it is very difficult to accurately measure changes in thickness, we assume the volume of the specimen remains constant and express the longitudinal strain as Et = ln(Lowo/Lfwf). After substituting Et into Equation 1 and inverting to eliminate negative values, the Plastic Strain Ratio, r, is given by

Equation 2 enables the Plastic Strain Ratio, r, to be calculated either manually or automatically with the use of two extensometers, one to measure the change in axial gage length and the other to measure the change in width. If the manual approach is employed, prior to testing the specimen width and distance between gage marks is measured with calipers. The specimen is then pulled to a strain less than at maximum force (dP=0) and then unloaded. The final width and gage length are then measured to determine r value. If the automatic method is employed, the specimen can be tested to fracture. Enabling Ultimate Strength, Yield Strength and Elongation to be calculated on the same pull which saves time and money.

Sources of Error in R Value

If we were to perform an error analysis on Equation 2, one would find that r value is much more sensitive to errors in width measurement. The author has seen reported r values that are more than 40% in error. Furthermore, the reported values are always greater than the true value. The two primary source of errors in width strain are: a) the edges of the specimen curl along the length of the specimen as it is being pulled; and b) sharp knife edges on the extensometer used for width strain measurements create high concentrated stresses that result in increased localized straining at the point of measurement. Both sources of error result in greater width strains and higher r values. After each test, the specimen should be inspected to determine if it remains flat. Errors in the r value will persist unless one compensates for the curling. Errors associated with sharp knife edges are more easily eliminated by installing knife edges with rounded or flat surfaces at the point of contact (see Figure 4).

Other Points to Consider

For many materials the r value remains constant over the range of plastic strains up to the maximum force applied to the specimen. For some sheet materials, however, the r value varies with the applied axial strain and as such should be reported with the as tested strain level. Because rolled sheet metals develop planar anisotropy, sample orientation can be significant to the measurement of Plastic Strain Ratio r. Therefore, test specimens are cut at 0o, 45o and 90o, respectively to the roll direction and the direction must be reported with each result.

Plastic Strain Ratio r is one of the more difficult formability parameters to measure because of the additional width strain measurement. R value errors as large as 40-50% can occur due to errors associated with measuring width strain. Careful inspection of the specimen after each test to check for curling and the use of proper knife edges are paramount to obtain true r values. 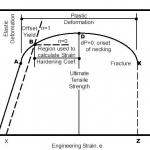 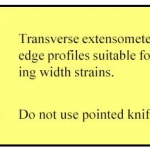 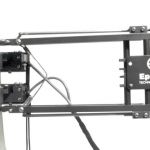 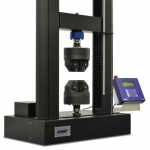 Just have a quick question about running ASTM E517 on your system?