This test method quantifies the static and dynamic characteristics of different designs of intervertebral body fusion device assemblies and evaluates their mechanical performances. Tests are conducted in vitro and the loads applied may differ from the complex loading see in vivo, therefore, results may not directly predict in vivo performance. Nevertheless, they can be used to compare mechanical performances. The location within the simulated vertebral bodies and position of the intervertebral body fusion device assembly with respect to the loading axis will be dependent upon the design, the manufacturer’s recommendation, or the surgeon’s preferred method for implant placement.

The test utilizes a static and dynamic torsion test system and ASTM F2077 torsion fixtures. ADMET’s eXpert 9900 Torsion Test System is capable of performing high capacity torsion testing both statically as well as dynamically. Before conducting ASTM F2077, it is important to read the entire specification in the relevant ASTM publication. 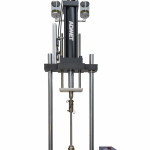 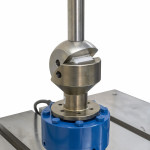 Prepare samples as described in the standard. Make sure each part is unused and labeled properly.

Just have a quick question about running ASTM F2077 on your system?