ASTM F88 seal strength is not only relevant to opening force and package integrity but to measuring the processes ability to produce consistent seals. Seal strength is a necessary package requirement and oftentimes it is desirable to limit the strength to facilitate opening the package. Properties of interest are the maximum seal force and in some cases the average force to open the seal.

A portion of the force measured to open the seal may as a result of bending forces. Thus, three techniques (A: Unsupported; B: Supported by Hand 90deg; C: Supported 180 deg ) have been devised to hold the samples at various angles to help control the bending forces. Because each technique will produce different results, it is important that the same technique is used for all tests in the same batch and noted in the report.

Prior to conducting ASTM F88, it is important to read the entire specification in the relevant ASTM publication. 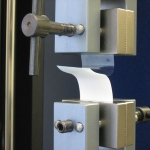 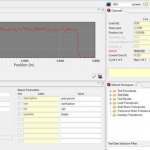 Force vs. Elongation Curve for Unsupported Test Sample according to ASTM F88 produced by MTESTQuattro

Just have a quick question about running ASTM F88 on your system?