In the aerospace industry, testing is critical in successful product development and implementation. Mechanical testing of materials and products used in aerospace applications is governed by strict standards and often require accreditation. The type of testing performed includes tensile, compressive, flexural, fatigue testing, and more.

Depending on the type of material tested and the application it is intended to be used in, quality control and material science professionals determine the type of testing and the environmental conditions required to determine mechanical characteristics of the material.

Tension testing, one of the most common mechanical tests, is commonly applied to test materials used in aerospace applications. The stress-strain curves obtained at the end of the tests give information on properties such as the tensile strength, strain, and modulus. Stress strain curves are frequently generated by universal testing machines equipped with an extensometer. The extensometer provides input on strain data while the stress is obtained by dividing the force measured with the load cell or the pressure transducer by the original cross-sectional area.

Compression testing applies force in a compressive direction to measure compressive strength which is the maximum load a material can withstand before it yields or breaks. Other properties measured include modulus of elasticity, compressive strain, compressive yield stress, and deformation. Testing machines can be equipped with deflectometers and displacement transducers to measure specimen deformation data.

Flexural testing, also referred to as flex or bend testing, is performed to measure the flexural strength and modulus of materials using 3-point and 4-point bend fixtures.  The flexural modulus is an important feature for materials used in aerospace applications as it is an indication of a material’s stiffness. The yield point, the stress level where there is an appreciable increase in strain with no increase in stress, can also be analyzed running flex tests. 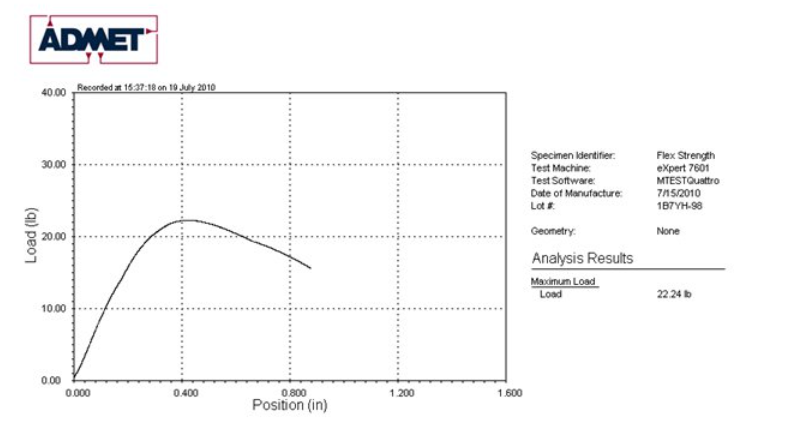 Fatigue testing develops a fatigue strength curve that is used to test the fatigue properties and life cycle of products by repeatedly applying and releasing force. Fatigue life, the number of stress or strain cycles required to cause failure, can be affected by the stress level, stress rate, cyclic wave form, the environment, and the conditioning of the material. Materials used in the aerospace industry often have specific fatigue criteria that they will need to meet in order to be used in a specific design.

Shear testing reports include shear stress, shear strain, and shear modulus in tension or compression loading. In the aerospace industry, products such as composites, fasteners, and adhesive material are tested in shear to measure the shear stress/strain data. ASTM D5379 is a test standard designed to measure the shear properties of composite materials using a special compressive shear testing fixture. ASTM F1362 describes testing for shear strength and shear modulus of aerospace glazing interlayer materials. Depending on the type of material and application being tested, lap shear testing methods include ASTM D1002, ASTM D3163, ASTM D5656, and ASTM D5868.

Product Configurations for the Aerospace Industry

ADMET testing systems are designed and made in Norwood, Massachusetts. Having in-house product development and engineering teams allows us to add versatility and customization based on the specific applications of our customers.

Below is a list of test machine configurations that have played significant roles for some of our customers in the aerospace industry. Please contact ADMET to work with our Sales Engineers and get more information on standard and custom universal testing systems based on your testing application. 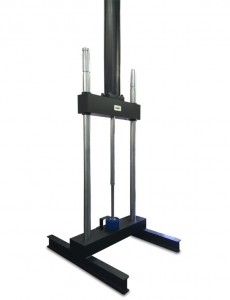 The inverted servo-hydraulic system is a custom product configuration that was designed with a top mounted actuator. The design allows testing load vs. position and cyclic properties of landing gear components such as shock absorbers in compression. The load capacity was selected by the customer and the configuration has been used to test many more components than initially planned.

The “Squirmin’ Herman” test system was designed based on Boeing standard BSS-7302 and is used to investigate the effect of aircraft passenger wear on seat upholstery fabrics and fire blocking layers.

ADMET wear testing machines come with a dynamic actuator and the fixturing required to run the test of your choice. This featured configuration shows the dynamic foam testing system with the Squirmin’ Herman fixture, designed per the description in the standard. The dynamic movement can be controlled by both position and load. 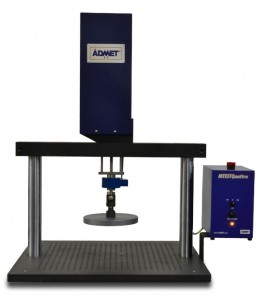 For aircraft seat cushion manufacturers, Indentation Force Deflection (IFD) testing is a must. ADMET’s eXpert 5603F Foam Testing Machine provides users with a compact device to perform ASTM D3574-B1 and ISO 2439 IFD testing on foams. The standard frame accommodates 15” by 15” samples, and other available designs include wider base platens to test larger specimens.

ADMET foam testing systems allow the users to run IFD tests automatically:  The height of the sample at the pre-load force is first automatically measured. The sample is then compressed to exactly the pre-defined compression percentages (typically 25% IFD, 65% IFD, and return 25% IFD). The preflex cycle and dwell time can be enabled or disabled in the test procedure. After the test, an individual test report and grouped test report is available, and all tests are automatically saved and are exportable to a .csv file.

eXpert 5603F machines can also be outfitted with other accessories to perform tensile, elongation, peel, and tear tests.

ADMET universal testing machine (UTM) options include designs that allow users to perform mechanical strength testing on any material from an aircraft’s nose to its tail. Testing systems are available in electromechanical and servo hydraulic configurations as well as in single column and dual column frame options.

eXpert 7600 series can go up to 5kN and are capable of performing tension, compression, flexure, and more. Single column frames are often offer an affordable and compact solution for low force capacity testing. In addition, the extended column option offered with these systems allow the testing of high-elongation materials.

In addition, all ADMET testing systems mentioned above can be supplied with accessories such as environmental chambers that allow the testing to be run under various environmental conditions. ADMET’s MTESTQuattro controller can log and graph temperature along with the test data allowing aerospace engineers to analyze how materials may react to changes in temperature.

ADMET offers an upgrade/retrofit option to existing testing machines in the form of software, digital controllers, grips/fixtures, or extensometers. Retrofit upgrades increase the functionality of testing systems, add flexibility in the variety of test results and analyses the user can perform, and improve functionality. In addition, ADMET retrofit packages allow users to run tests according to standardized test methods such as ASTM standards as well as create custom test procedures from scratch. Depending on the system and new requirements, retrofits allow cost savings in comparison to the purchase on a new universal testing system.

In addition to MTESTQuattro, ADMET’s DC1x Digital Fatigue Controller can be used for reliable fatigue tests. The DC1x comes with a touch panel display and can also be used with ADMET’s GaugeSafe software for viewing and editing test setups and viewing waveforms and peak/valley/cycle data in real-time on a Windows based computer. Test data and results can also be imported into spreadsheet programs for further analysis.

An important feature of the DC1x Fatigue Controller is that it is able to maintain consistent load or displacement amplitudes for dynamic testing even up to 40Hz.

The aerospace industry requires the highest quality testing for accurate and repeatable results, ensuring successful prototypes and designs are developed into safe and efficient end products. ADMET testing systems, all built at our facility in Norwood, Massachusetts, feature versatile designs and custom solutions that help customers in this high-stakes industry meet their testing goals reliably, day after day.

Need to discuss your aerospace testing needs with an expert?

We're standing by to help you!
Contact us today!
By Deniz Yalcin|October 22nd, 2018|Products|